Is Windows Defender a Good Antivirus 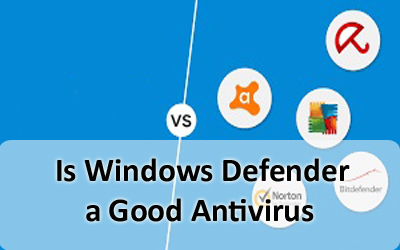 Microsoft Window Defender is an in-built bare bone antivirus program that is by default used in Windows 10 system and delivers for its users, comprehensive security protection against Malwares, Spywares, and Viruses.

However, its earlier version faced a lot of criticism as it had less effective and comprehensive security features. For a long time, it was unable to come in the category of ‘Good Antivirus.’ But as time changed, Window Defender has also changed itself a lot. Now, its new and improved version has a lot of features that one can rely on for the security and protection of the system’s data, files, applications, and programs, etc. Its updated and improved version, therefore, brought it in the top list of ‘Good Antivirus’.

Now, Window Defender offers free of cost to its Windows 10 users a lot in terms of usability, performance and as well as protection. With the help of Windows Defender updates, Windows 10 users can now be able to provide their system pretty good firewall protection as well as on-demand scan against malicious programs, etc.

Time to time various tests have been conducted to rate the available antiviruses in the market.

And, guess what! Windows Defender scores above average and showed substantial improvement in most tests in a way that it received 6 points in protection and 5.5 in both Performance and Usability. Therefore, it is now considered by everyone a decent anti-malware protection application for Windows. Not only that, but it is also fair to say that Windows Defender prevents large amounts of spyware, viruses, malware,  from finding their way onto the O.S of any computer system as well as on other devices.

However, like all anti-malware systems, it cannot be guaranteed to ensure that your system does not become infected with viruses and malware; still, Windows Defender has various pros such as low system impact, constant free updates, automatically installs with the system and protects it 24*7 and so on.