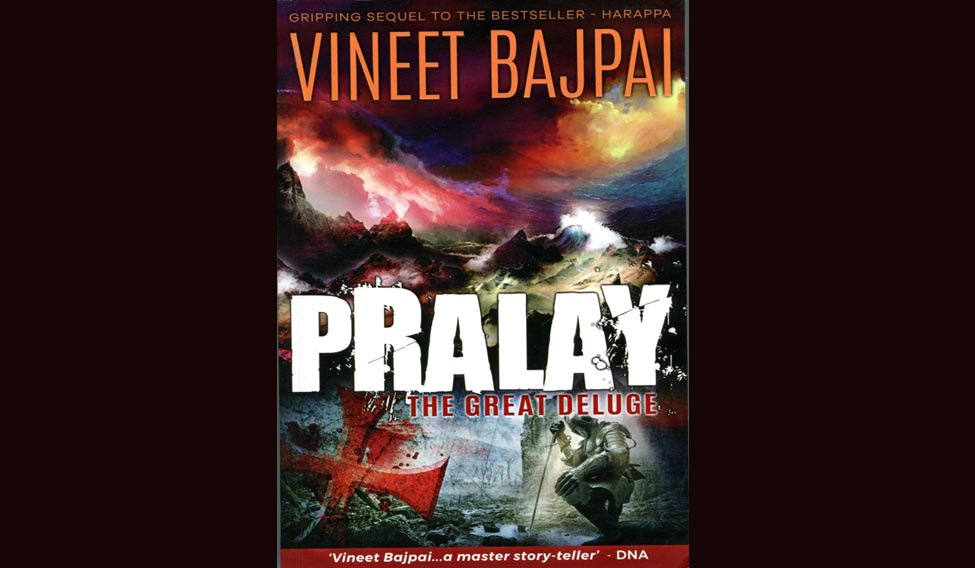 "“Even death is afraid of the White Mask…”

1700 BCE, Harappa – The devta of Harappa has fallen…tortured and condemned to the dungeons of the dead. His murdered wife’s pious blood falls on the sands of the metropolis, sealing the black fate of Harappa…forever.

2017, Banaras – A master assassin bites into cyanide, but not before pronouncing the arrival of an unstoppable, dark force. A maha-taantric offers a chilling sacrifice.

1700 BCE, East of Harappa – A mystical fish-man proclaims the onset of Pralay - the extinction of mankind. The Blood River rises to avenge her divine sons.

What happens to the devta of Harappa? Is Vidyut truly the prophesied saviour? Who are the veiled overlords behind the sinister World Order? What was the macabre blueprint of the mysterious emperor at Bithynian City? Turn the pages to unravel one of the world’s greatest conspiracies and the haunting story of a lost, ancient civilization."

The Author has done an awe-inspiring job in its prequel, “HARAPPA” and I was enthusiastically waiting for its sequel and here it is. My tick- tock waiting watch is stopped and finally I am giving my verdict on Pralay – the great deluge.

I enjoyed Pralay-The great Deluge which is the second part of Harappa - the curse of the Blood River.Like the volume one, this book holds the equivalent charisma and page turner for all. Several characters role play shows instantaneously in this book, like a historical drama based move rolling.

Coming to the story, in the last book we had seen that Vivasan pujari was sentenced to mrit karavas like a hell type place and on the next day numerous torture done by King Chandrashekhar army. He landed to the west of Harappa, at the place of Sura, the mighty demon king, with the extreme mental country of in search of revenge of the fatality of his beloved soul mate Sanjana and his single son. The mighty king agrees to help him, but in exchange for something, which stunned the great devta for an instant. On the other end in Banaras, Vidyut flabbergasted and immobilized to see the sudden alteration of Bala, his brotherhood friend. On which earth Bala tried to kill Vidyut and who is the mastermind behind it. Each passing moment Vidyut condition is getting life-threatening. Does he recover from it? In the meantime, meanwhile, the Masaan Raja, the deity of the dead, Trijaat Kapaalik entered the matth with his 666 maniac followers and his guts left everyone stunned in the matth. What was the purpose to visit in such horrible phases to the Matth? Another fragment of the story, Manu succeeded to get away with the lifeless body of his adored mother with the support of Pundit Somdutt and swift with his horse to the East of Harappa in search of the Black Temple as directed. On the way, he met Matshya, a mystery man.Manu seeks help from this mystical man Masaya for taking revenge for the death of his parents. Did he help Manu on his mission? All mystery will solve, once you go through the book. The fast pace of the book holds you till the end & it’s a single sit read for me. Writing a historical fiction is a tough job and need too much research to make it the best. The Author has succeeded in that case. Language and narration are breath-taking from its first page of the book.
Mythology was never my cup of tea, but recently I have read few amazing mythology related novels including this and I just loved it now. I was gripped and enthralled by the transformation of the pujari into evil. Saptrishi and Vidyut played and justified their role.
The cover is not unique still simple and good it could have been better.
The title is catchy, this book I never thought will be released soon I must pat on the back of author for his creativity and imaginations!