AS A TEACHER, WHAT IS THE HARSHEST TRUTH A STUDENT HAS EVER TAUGHT YOU? 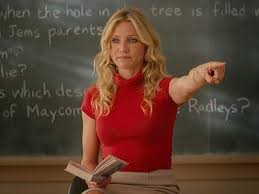 These small anecdotes shared by teachers will give you a glimpse of how teachers learn life lessons from their students, but in a harsh way--

Ms.Baijal taught in a prestigious convent school.She was good in her subject which was Maths.She taught students of class 9 th and 10th . Being an all girls school the students had a good rapport with her.She felt she could understand her students well.But she was sadly mistaken when she got a rude answer from a student of class 9th.She felt she was well versed and had a knack for teaching.While teaching Maths one day, she asked one student to come and solve a maths sum on the board. The student came to the board,looked at the sum and went back to her seat.The teacher was furious at the girl's behavior and berated her for not being able to solve a simple sum. The girl after being reprimanded coolly told the teacher, why she gave sums from a foreign author's  book which was meant for the A level of foreign universities.She told the teacher, her teaching style was faulty and the fundamentals were never cleared.The teacher realized her true worth from the student's harsh words and decided to work upon herself to become a better teacher.

Ms.Reema had a two decade teaching experience.She taught Biology to students and prided herself as one of the best teachers.No student had said anything negative about her.She was a strict teacher and taught her students with an iron hand.She believed in full professionalism. The senior students whom she taught were never comfortable with her.She had no empathy and could humiliate students with the choicest words if she found them talking or laughing in her class.She was an old, spinster and the students felt no one would marry  such a harsh person.One day while teaching she felt a student was not paying attention.She shouted at the girl, who had been fraught with some kind of worry and soon the girl burst into tears. Ms.Reema had no patience with tears and asked the girl to stop crying and concentrate or she would flunk the class. The girl immediately stopped sobbing and retorted back that flunking didn't bother her.She had lost interest in life and studies as her parents had fixed her marriage with a boy double her age. She developed the guts to tell the teacher she won't be able to understand things about marriage as she was a spinster. Ms.Reema was angry but then she realized that she was a bad teacher and a worse human-being.She had never shown sympathy towards anyone and had created a kind of shell around her.No one liked her company including her colleagues but no one had dared to tell her what her student managed to tell her.A harsh truth learnt from a student.