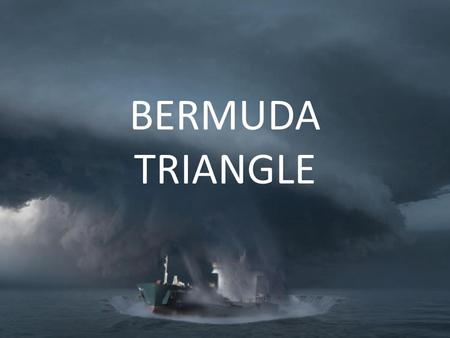 The first name that was given was Miami Triangle but was changed to Puerto Rico Triangle when Florida protested that it would lose tourists. It was changed to Bermuda Triangle when Puerto Rico protested for the same reasons. Also called the Devil's Triangle is an area located on the North Atlantic Ocean where many ships and planes have vanished mysteriously. Its vicinity is one of the most frequently used shipping lanes in the world by commercial and private both.

The Flight-19 that set flight for a training session on December 1945 never came back.

The two Martin Mariners that went to rescue them didn't find them and only one came back.

The Star Tiger aircraft disappeared just before it was about to land at the Bermuda airport.

. The flight DC-3 NC16002 vanished very close to the south coast of Florida. It was landing in Miami.

In October 1954, a super constellation naval airliner vanished as well. 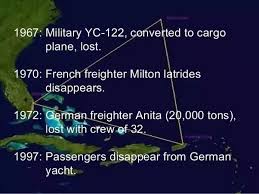 The Mary Celeste, which was known as the ghost ships of the Bermuda Triangle, had its own shares of misadventures, way before its vanishing journey in 1872 resulted in the ship being salvaged with no survivors.

The Ellen Austin met with another ship in Bermuda Triangle that was moving at full speed but absurdly had no one on board.

One of the greatest mysteries was the vanishing of the U.S.S Cyclops in the Bermuda Triangle.

The nuclear powered USS Scorpian of the United States Navy disappeared in the Triangle in May 1968.

A large amount of methane gas finds its way out of the sediments and reduces the density of water in that area, which can cause ships to sink easily. They can also saturate the atmosphere which causes the planes to crash.

It is a strange area within Bermuda Triangle that has no shores but is surrounded by ocean currents. Dense seaweeds and low wind are the cause of ships becoming motionless in this area which becomes a trap for ships.

Scientists have noted hexagonal shaped clouds that have straight edges on Bermuda Triangle. Meteorologists testify that they are similar to air bombs. They can create winds at speeds of up to 170 miles per hour, waves 45-feet high and surface wind at 100 mph which can be dangerous for aircraft or ships as they can cause them to spiral out of control.

Often it has been reported that the vehicle gets enveloped in an electronic fog that travels along with it. This leads to malfunctioning of the electronic devices and other equipment. Then the ships and airplanes either disintegrate or disappear without a trace.

The Bermuda Island forms one corner of the triangle. It is widely known that the island is nearly surrounded by countless shipwrecks that lie on the ocean floor.

There are numerous underwater reefs surrounding Bermuda that rise from the ocean floor of the sea and remain hidden under the water. The captains of the ships had to depend on a compass and navigational charts and occasionally on the position of the stars to guide them through the sea to reach their goal. And when the ships passed over hidden reefs, the hulls of the ships were torn apart by them, sinking them quickly.

6. The blue holes and whirlpools

These large underwater caves have been made by geological transformations. They have very strong tidal currents traveling through them. These bottle-shaped caves open near the water surface. The largest blue hole in the Bahamas is the Dean's Blue Hole with a depth of 663 ft.

The tidal change is caused by the water that flows in and out of the tunnels. This is harmful to ships passing over them or even close to them. Any ships passing easily get pulled in.

The Gulf Stream is an ocean current begins in the Gulf of Mexico, covers the Straits of Florida, passes through the Bermuda Triangle and ends in the North Atlantic. A plane making a landing on the Gulf Stream or a boat experiencing engine trouble can easily be carried away.

Example: On December 22, 1967 the Cabin Cruiser Witchcraft, noted engine trouble close to the Miami buoy around a mile from the shore but vanished till a Coast Guard cutter reached.

The magnetic North and real north are not the same. But in Bermuda Triangle both these North's become the same. Compass variation can also be the cause.

They are extremely intense and powerful storms that originate from Atlanta cross the Bermuda triangle that heads towards the US. Even satellites can't track them. In 1502 Francisco de Bobadilla’s Spanish fleet sinking was the first incident to ever go down in history.

These huge waves caused the previous largest offshore platform, the Ocean Ranger, to capsize in 1982.

The seafloor is unique as well. The usage sound waves, (sonar mapping) has been used by the scientists to comprehend the depth of the seafloor at different locations in the triangle.

One such area is at the Bahamas, at the western corner of the triangle. It has been noted that the seafloor falls to a huge depth of 15,000 ft.

Pilots can confuse one island with the other and often not find a way back. The vehicle is difficult to manage in turbulent surroundings

There are explanations that these incidents are based on supernatural theories like aliens.

These skeptics believe that there is nothing odd and can be explained with some science or logic.

IS THE MYSTERY OF THE BERMUDA TRIANGLE FINALLY SOLVED?

It is a very notorious part of the world where countless ships and planes have vanished without an explanation.

Dr. Kruszelnicki states that according to the Lloyds of London and the US coast guard, the number of planes that vanish in the Bermuda Triangle is equivalent to any other place on a percentage basis.

There is a lot of traffic since it is close to the equator and is close to a wealthy part of the world i.e America.

The USS cyclops, a carrier ship that had 309 passengers on board, also vanished in 1918.

Search teams set out on the same route when it failed to arrive at its destination but it was never found.

Flight-19 triggered the mystery further. The Martin Mariner that was sent to search for it also disappeared. There were no bodies found even though there was a massive land and sea search.

The doctor said that people thought there were supernatural forces at work because both the planes disappeared.

The National Oceanic and Atmospheric administration claims that the triangle does not exist. They state that the environmental conditions caused the disappearances. They also say that the US Board of Geographic Names does not identify it and neither does it have a report on it.

In fact, no reputable scientific organization considers the Bermuda Triangle to be a bona fide thing. So it's rather nice that, for once, everyone else seems to think so too.

No reputed science organization agrees to the fact that the Bermuda triangle is real.

Exists or not exists, remains a paradox. The fact remains that the mystery continues to perplex with the continued and incessant occurrences and incidents shrouding the area known as the “Bermuda Triangle.”