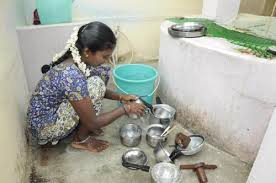 Born in a family of farmers, Urmila is fourth among her nine siblings of brothers and sisters. Her father being a poor farmer brought up his children in the village. Her elder sisters  were the first who shifted to a city after marriage. They worked as domestic helps in the city and brainwashed her to move to the city. The older siblings were illiterate, her father tried to get her educated but she played truant. She wanted to help her parents lead a better life as she had seen a lot of poverty. She too wanted to move to the city but her parents were not comfortable to  send a young girl alone. In villages girls are married young and they are sent to their marital home only when they come of age. She too had a child marriage and being in her teens she was persuaded to go to her marital home. She didn’t want to live in the village as her husband was also a farmer residing in the same village. She felt city life beckoned her and she could pursue her dreams only by living in a city.

Two decades back when the country wasn’t so well developed, this feisty girl broke herself from the shackles of marriage as her farmer husband was adamant not to leave the village and relocate to a city. The gumption and guts shown by her to live life on her own terms and face the villagers ire is praiseworthy. Her parents supported her decision and let her go and live with her married sisters living in a city in U.P They were relieved when the sisters vouched for her safety in the city. They introduced her to their employers and managed to get her hired as a domestic maid in an upcoming colony.

She was a bit tongue tied and shy when she joined work but with the dint of her hard work she managed to impress people . She managed to get employment as a domestic help in a lot of homes. She learnt the ropes of the trade and soon settled down not missing her village life. But she yearned for her parents who still resided in the village. Every festival she made trips to the village taking gifts for her parents. Self-esteem, honesty and dedication towards her work helped her to progress well. She didn’t sit and backbite about her employers as the other maids did. Her aim in life was to build her own house and ask her parents and younger siblings to stay with her. She started taking baby steps towards her dream by  taking her employers’ help to open her savings account, getting  an insurance policy and procuring an ATM card. She felt thrilled to become smart and capable compared to her elder and younger siblings. Her independent spirit made her fearless and she worked till late hours in the colony. She shifted from her sister’s house to a rented one room shanty near the colony. Employers educated her and she became more self-reliant. Her dream of building her own house was coming true, when she managed to buy a piece of land with her savings in the city.She procured a little loan from her employers and started with the construction of the house. It is not easy for a single, young lady to manage everything single handed, she faced lots of glitches to complete her dream house. Her employers knowing her honest nature, pitched in and managed to steer her out of difficulties. Her parents and married siblings were a pillar of strength who too loaned her money to complete the house.

After lot of trials and tribulations she had a small house-warming for her close family members and shifted into her dream house. Her parents weren’t too keen to shift to the city, so they come off and on to visit her and are proud of her achievements. She instead brought her two younger sisters to give them  a good city education. She worked at 15  houses as a domestic help and managed to educate her two sisters. One has crossed school and is doing her graduation, while the other is pursuing her plus two. She bears their education expenditure and is a bigger help to her parents compared to her brothers who are not in a good position to help their parents. She sends them money and takes care of their health expenses.

She had yet another dream of owning her own vehicle as she has difficulty commuting on a cycle from her new house to the work place. And as you can say God helps those who help themselves, a employer helped her by taking a loan on her name to buy her a vehicle. The  scooty is a boon as now she needs no one to aid her out, she commutes to her workplace, she ferries her sisters to their exam centres ,schools, college whenever they need her aid. A thirty year old having both maturity and magnanimity. She may belong to the lower echelons of society but her grit is commendable.