Dumas Beach - Is it really haunted? 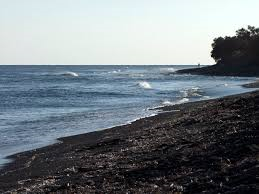 Dumas Beach is an urban beach along the Arabian Sea, located 21 kilometres southwest of the City of Surat in the Indian state of Gujarat. It is a popular tourist destination in South Gujarat.

Locals of Surat, the Dumas Beach is a black sand beach. It is also one of the most haunted places in India. While there is conflicting information on the net with many saying this is all false, there are people who have experienced the presence of something too.

One of the prime reasons Dumas Beach is considered haunted is because it was an ancient burial ground for Hindus and people believe that spirits still roam here and their whispers can be heard in the quiet of the night. During the day, this beach has a lot going on with several vendors, locals, tourists flocking here and stalls selling food and drinks. But as the night inches closer, there are fewer people here and a feeling of eeriness engulfs the area. Blame it on the rumors or the presence of ghosts, the beach is usually secluded at night as most people refrain from even taking a walk here in the dark. Perhaps the black sand and its history of being a burial ground add to the spookiness of the place.

There are many scary stories to tell about the astounding Dumas beach. Haunted Dumas beach is said to have many spirits existing and walking down. According to the Hindu ritual, people who do not get eternal satisfaction roam to the place where they get cremated. Legends even say the black sand is due to enough amount of ash which mixed with sand.

This place looks terrible with appearance of dark. As dark appears, scary giggle and laughter provide people a hair rising experience. The spirits appearance can be felt. One thing that is usual to be said about haunted Dumas beach is - Wind around this area is said to be full of spirits of dead people. Many people have felt the sounds of whisper and loud laughter.

The beach has black sand, and is notorious for incidents, such as people disappearing. Howling sounds at night, Most of the natives say that the spirits walk down on the beach at night. To this day, there have been numerous reports of paranormal activity on the beach, where visitors claim to hear strange noises and voices, and loud laughter. White apparitions and moving orbs have been sighted and other inexplicable activities have been witnessed, too. Also, many tourists are known to go missing while strolling on the beach at midnight, claim the locals.

Fun Fact: Dumas Beach was also reported as one of the most haunted places in the Gujarat state by the Economic Times.

As you enter this place, your senses itself describe you the story with "paranormal" touch. This place has reported many paranormal incidences and thus, it is also categorized as one of the most haunted places in India. It is strictly advised not to enter this beach after dark - As many tourists who entered this beach in dark are still missing.

Whether the spirits exist or not we cannot be sure but what we do know is that we cannot just dismiss the locals and the tourists as just silly rumours.