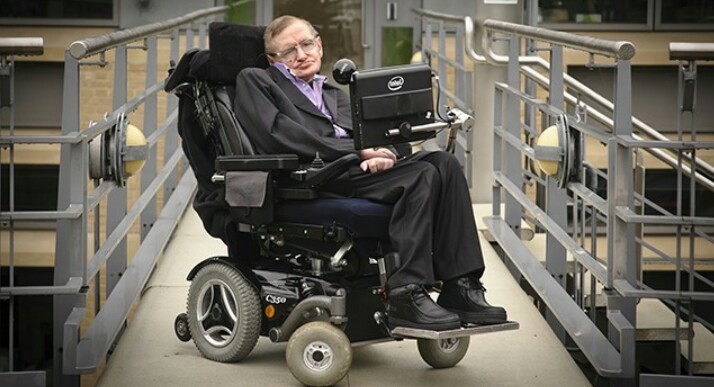 He was born on 300th death anniversary of Galileo, in Oxford, England. As a student he admits, that he spent about maybe an hour a day on his school work. He entered Oxford University at the age of 17. In 1962, he moved to Cambridge University to pursue a P.HD in cosmology.

At the age of 21, he was diagnosed with ALS (amyotrophic lateral sclerosis) or Lou Gehrig’s disease. It is a corrosive motor neuron disease so overtime he lost his functionality of muscle. The doc

tors predicted that he would have only 2 years to live. He proved them wrong and died at age of 76 years on 14th March 2018.

In 1974 he stunned the science world with his P.HD in Black holes. Of his research on Black holes, which absorbed him for more than a decade, he says, “It might seem a bit like looking for a black cat in a coal cellar”. He taught us how to define a black hole, he made a brilliant discovery that black holes could radiate, named after him the Hawking radiations. This discovery built a bridge between black holes and thermodynamics. 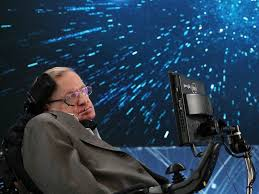 Stephen lost his voice due to the disease and had to use computer modulated voice which was controlled by the twitch of his cheek muscle. He believed “I am just a child who has never grown up. I still keep asking these ‘how’ and ‘why’ questions. Occasionally I find an answer”. He pursued his curiosity about the universe. ‘How it came into being?’ ‘How did we as human race evolve?’ ‘Is there life on other planets too?’ He was persistent in finding an answer. He used to explore the universe within the confines of his wheelchair. He held the same chair in Cambridge University that Sir Isaac Newton once held.

His work is his legacy, which will continue to inspire generations to come. His other books to read are ‘The theory of everything’, ‘The grand design’, ‘The nature of space and time’, ‘The universe in a nutshell’, ‘Black holes and baby universes’. He talks about quantum physics, the expansion of universe, the big bang theory, the black hole, multiple universes.

His daughter Lucy hawking noticed at her son’s birthday party that children were more imaginative than adults. When her son’s friend asked Stephen what would happen if I fall into the black hole, to which he replied “you will be shredded into spaghetti”. The kid was elated with his response and was dancing around like spaghetti. Lucy noticed while others pretended to take the question very seriously and put on their thinking caps. The kid was still happy and could imagine himself falling into a black hole.

She then decided to write children’s book to make them understand about black holes and the universe. Stephen & Lucy Hawking co-authored many short story books. Like ‘George cosmic treasure hunt’, ‘George’s secret key to the universe’, ‘George and the big bang’ and many more. These books excited kids and became best seller. On one hand children could easily picture themselves in a story book and relate with the character and on the other hand ignite an interest in astronomy and the universe.

‘The theory of everything’ inspired me to question, to stay curious, to understand. Personally for me, it is the best non-fiction book to read. It has been divided into seven lectures and explains complex-seeming concepts in the most simplified way. His unique way of making things easy made this book the non-fiction best seller. To get a better insight of what his life was like you could include his biography “Stephen Hawking by Dr. Kristin Larsen”, in your list of non-fiction books to read. His life is not just another exceptional story, it is definition of the term “limitless” itself.

His love for science and learning was impeccable. His books are on Goodread’s list of most popular books (non-fiction). The world has celebrated his work and will continue to be the central ground of many future discoveries.

He was not only a scientist but also a great thinker who expressed his concerns about the climate change and the deteriorating condition of the planets, humanity.

“We are in danger of destroying ourselves by our greed and stupidity. We cannot remain looking inwards at ourselves on a small and increasingly polluted and overcrowded planet.”

He was quirky, funny and sarcastic.

One Saturday night, the physicist Stephen Hawking was talking about the universe. He was taking questions.

One of the people in audience asked, “What do you think is the cosmological effect of Zayn leaving One Direction and consequently breaking the hearts of millions of teenage girls across the world?”

“Finally," Hawking replied, "A question about something important."
“My advice to any heartbroken young girl is to pay close attention to the study of theoretical physics. Because one day there may well be proof of multiple universes.
It would not be beyond the realms of possibility that somewhere outside of our own universe lies another different universe. And in that universe, Zayn is still in One Direction.
This girl may like to know that in another possible universe, she and Zayn are happily married.”

He was a popularizer of science. He made appearances on Late night with Conan O’ Brien, Anyone can Quantum (2016), Last Week Tonight with John Oliver, the Simpsons, The Big Bang Theory, Star trek: the next generation. He tried to bridge the gap between intellectualism and pop culture.

He broke the bounds of his disability with his exceptional work. He said “My advice to other disabled people would be, concentrate on things your disability doesn't prevent you doing well, and don't regret the things it interferes with. Don't be disabled in spirit as well as physically.”

We live in a bewildering world, which is filled with wonder. There are phenomenon science still struggles to explain. A genius like Stephen Hawking questioned and passionately worked towards finding the answers. He was a passionately in love with Science.

“Science is beautiful when it makes simple explanations of phenomena or connections between different observations. Examples include the double helix in biology and the fundamental equations of physics.”

Although life is extremely fragile, he immortalized himself through his work.  He was persistent in his pursuit of knowledge. He believed that works give you a purpose and meaning to life. He detangled concepts that once seemed unsolvable. He made us realize our capacity to be limitless and inspired inspired us to keep wondering, keep questioning.

“Look up at the stars and not down at your feet. Try to make sense of what you see, and wonder about what makes the universe exist. Be curious.”