Yoga Is Not Necessarily Religion and Spirituality 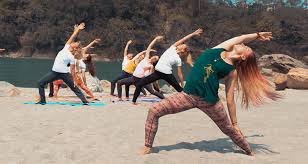 Are you an atheist who is interested in the activities of Yoga, and not religion? Tired of contemplating the secular dimensions of it? Then stop overthinking, and dive into the enlightening space of Yoga.

Sadhguru~ Yoga is a technology and religion has nothing to do with it.

Yoga may have erupted from the Hindu mythology but similar ‘art of living’ forms are founded in other parts of the world as well. It’s like you are saying, ‘I want to go for a trek, but it was not introduced by us, so I can’t go’. Erase the naive misunderstandings to enjoy what Yoga has to offer.

If the idea of a God or a deity does not motivate you, then it’s alright since Yoga is not necessarily religion or a strong belief in the higher power. It is a process to find yourself, to know the truth though inner-wisdom, and transform yourself for good by fixing things inside you which this man-made world cannot do.

Now, spirituality is the asav of Yoga, but it has a thin line attached to it. When a yogi or yogini is meditating, practicing asanas, or doing deep-breathing exercises of Pranayama, they tend to focus on the Agnya Chakra with closed eyes to awaken the divine consciousness. During this process, they have the option to either think beyond the horizon, to picture a deity, to let the light come in, or to enter your own wonderland. Basically, whatever works for you, whatever makes you feel!

Spirituality exists, but connecting it with ‘only’ religion is not the right explanation of Yoga since it is something you can experience and not restrict to just ‘one’ single thought. It is more about what you see, and what you accomplish within.

Does Yoga make you a Hindu?

Certainly not! You are marrying a wellness form, not any religion, society or region. Yoga is beyond the classifications of Hindu, Muslim, Christian, Jew, etc. It is a living mantra in the fitness form, which is a free remedy for your physical, mental, and emotional illness. Don’t be scared of that your non-religious beliefs will be taken away from you as there this is not an Al-Qaeda base camp preparing criminals by brainwashing them.

Here, the complete opposite situation lives through the grass by creating a peaceful society of yogis, allowing them to explore more about themselves by gaining the freedom to pursue knowledge, inner-wisdom, and power to look beyond the lens with no external influence.

“Building a chain of thought without the brainwash”.

For example, if you are looking forward to attending a Yoga Teacher Training in Rishikesh (the capital of Yoga), then you must have researched that the syllabus includes the theoretical study of Yoga and not just the physical practice. Yoga philosophy talks about the origins and the involvement of sages, Vedic scriptures, understanding the meaning of Yoga through Upanishads or holy books like Bhagavad Gita.

At no point, in the course of 200 hour yoga teacher training in Rishikesh will you be forced or even asked to follow any particular religion. It’s your choice to make, not anybody else’s. Even the Yoga gurus look beyond the perspective of religion. Yoga was meant to share with the world to encourage health and wellness, not to show superiority or influence people into following Hinduism. Yoga is one such mystical tool which connects you with nature; it aligns the universal energies to create a prolonged positive difference in your lives.

So, it doesn’t matter if you are an atheist,anybody can practice Yoga without getting concerned about the boundaries attached to it, as there isn’t any.