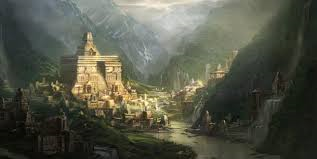 India, the mythical land, is said to hold the secrets of immortality. It is the land where the fabled Gyanganj or Shambala or Shangri-La exists. We don’t really know whether to consider the tales of Gyanganj to be true or consider them as just a bunch of made-up folklores that trickled down through centuries but, there are stories that somewhat sound convincing. Some of these stories originated in India and may be considered as mere stories and nothing more by western people but at the same time, some of these stories come from western people themselves.

Gyanganj – the land of immortals is said to be tucked away deep in the womb of Himalayas. Truly speaking Gyanganj is not just an Indian legend. One can also find its roots in Tibet. According to legends, Gyanganj or Shambala is city-kingdom where enigmatic eternal beings live and keep themselves hidden from the entire world. What’s more enthralling is that these immortal beings, in a myriad of clandestine ways, are said to influence the entire world. They are being said to orchestrate the evolution of all living forms that have consciousness.

No one knows where Gyanganj is located. It is said that Shambala or Gyanganj or Shangri-La is kept hidden in a completely different plane of gineousness and that it is not visible to anyone. It is so artfully camouflaged in a different plane that even the most modern and technologically advanced mapping systems cannot find the location of Gyanganj. Hindu scriptures like the Valmiki Ramayana and Mahabharata have references to Gyanganj. The place in those scriptures have been referred to as Siddhashrama.

Gyanganj – the land of immortals is hidden from the external world. So, there is absolutely no way a mortal can reach the place unless otherwise someone is selected to be there or someone has attained the necessary karma to be a part of world of eternal beings.

Gyanganj is said to be the land of sages who have, through the science of yoga and meditation, gained the knowledge to live eternally. These sadhus and sages are being described (by those who claim to have experienced Gyanganj in person) to be week and feeble-looking people who have harnessed enormous energy and knowledge that is far beyond the conceivable limits of an ordinary man.

The reason behind their immortality can be, to some extent, explained by modern science. Modern science describes that aging is a disease. Scientists from all over the world including countries like Germany, Great Britain, United States, Russia, France etc., after a long study of aging and death, have come to a conclusion that death is not inevitable. They say that if a method is found out by which cell renewal process can be kept intact and the efficiency of the life-sustaining mechanism of the organs can be maintained, a person can live on for 1000 years and more. This is exactly what ancient Ayurveda says.

The yogis of Gyanganj, through yoga, can control their emotions which are responsible for release of hormones. Hormones in turn are responsible for controlling body’s metabolism. So, if hormones are controlled, metabolism can be controlled and hormones can be controlled only when emotions can be effectively controlled. Problem with modern science is that there is no thought or emotion controlling mechanism available and hence, there is no winning over death.

It is said that Gyanganj – the land of immortals does not belong to the East or the West and neither is it the property of any particular religion or culture. It is said to have its own independent basis and preserves the most secret and sacred spiritual teachings of the entire world. Thus, anyone who is worthy enough to be at Gyanganj will find the place irrespective of the part of the world he or she comes from.

According to the legends, Gyanganj is believed to be an antediluvian Indian and Tibet tale of a city-kingdom of enigmatic eternal beings that remain concealed from the world. It is said that they exist deep in the Himalayas, however have an influence over mankind in several clandestine ways.

As per the Buddhist beliefs, Lord Buddha have assumed the form of Kalachakra deity before his last legs and preached his utmost teachings to a group of adepts in South India. King Suchandra was among the adepts present there. He penned down all the sermons of Lord Buddha and took them back to his kingdom- Shambhala.

In the words of Tibetan Buddhism

Shambala is the Tibetan Buddhist version of Gyanganj. Shambala literally translates into “the source of happiness”. The Tibetan version attaches the famous Kalachakra or the Wheel of Time with Shambala or Gyanganj. Some ancient Buddhist texts of Tibet actually give instructions to reach this land of immortals but the directions/instructions are too obscure and is said that only enlightened people will be able to follow the directions and find Shambala.

Tibetan Buddhists believe that this mysterious region is hidden at some obscure place in Central Asia. What’s more interesting is the Tibetan Buddhist mythos says that when the world falls in chasm of ravenousness and war, the ruler of Shambhala will appear to escort the blue planet into a better eon.

Some really amazing facts about Gyanganj

In some of the ancient Buddhist texts, there are few instructions to access Gyanganj. However, the directions to this place are incomprehensible. It is said that only enlightened yogis can reach there.

It is supposed that Gyanganj is artfully camouflaged in an entirely different surface of genuineness. For this reason, Gyanganj can never be discovered by modern scientific technologies.

The legends say that Gyanganj has its peculiar and autonomous foundation in human wisdom and does not belong to East, West or any other philosophy.

As per the beliefs, there is no death in Gyanganj. The consciousness always remains alive there.

‘Lost Horizon, about the lost kingdom of Shangri-La’, the novel of a decorated author James Hilton, is based on the concept of Gyanganj. In addition, Hindu scriptures like ‘Mahabharata’ and ‘Valmiki Ramayana’ also hold references to Siddhashrama, which is another name of Gyanganj.

It will enthral your nerves if you, even for a second, believe that there lies a place where innumerable sage beings orchestrate the evolution of not only human race but all the conscious beings.