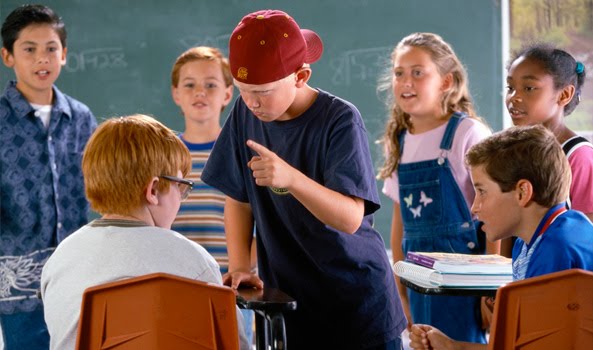 SCHOOLING-- overnight, the very word seems to have turned upside down and now it has become a metaphor of death trap. The escalating incidents of suicide, rape, physical abuse, and murder inside the very four walls of the school, has left everyone too shocked and traumatized. No one is able to comprehend as to why these things are happening inside the school where most of them are innocent children and the remaining ones are supposed to be their guardian angels-- their teachers!  It is so disheartening that many times these children are so innocent they do not even understand that they were a victim of violence and were physically violated.  No one is able to answer the question as to what had caused this sudden shadow of holocaust inside the education system.

In short, this violence exhibited by children inside the school can be attributed to the cumulative effects of many parameters like our changing society, the sudden explosion in gadgets, the shrinking family, and living spaces, the lack of social interaction etc. But it can be said that one of the largest factors, at least in the Indian contest is the lack of elders in the family or the vanishing system of the joint family. The elders prefer to stay on their own in the senior citizen colony and the young parents are alone with their children.

It is now a trend with the modern day parents, rich or poor, to lavish their children with luxuries of games and gadgets unheard of so far. One may be surprised that even the daily wage workers, the maids etc working for limited salaries also try to pacify their children with costly mobiles, watches, and shoes, only to satisfy their parental ego.

But everyone had forgotten the highest need of a child. The COMPANIONSHIP, the need for someone to talk to or play, to share their thoughts. Their day to day fears, disappointments, failures or hurts which might look meaningless for elders is vitally very important for the children. They need someone to vent out these feelings to get the comfort and calming for their heart. If these feelings are not vented out they become deep-seated hate and then turn into violence. The presence of elders in the Indian family system earlier was a divine blessing in disguise for the children. The elders not only listened patiently to the children but comforted and encouraged them. If they had some pent up anger or sorrow the elders pacified the child and gently advised them about sharing and caring and thus helped in controlling and diverting their emotion.

But today in most of the house both the parents are highly educated and are working at highly responsible posts, calling for their major part of their time. They work late, are too busy, travel frequently and have no time to listen to their children. Frequently it is seen that the children craving for attention keep on pestering them trying to tell something which bothers them when their parents are busy on phone or on their computers. But the parents brush them off.To compensate their lack of time for their children, the guilt-ridden parents load them with gifts beyond their age or need.

Today we see that a child of 6 yrs old is busy with a video game that teaches him only one message--. WINNING!. It is the only thing which matters in his game. While playing the game, he is killing the pig or a bad guy. But it is an underlying streak of violence which is actually giving him the satisfaction.  It is the satisfaction of his ego. Later in the school, he cannot differentiate between the virtual and real-world violence. For him winning is the only correct end.  Hence if the boy sitting next to him refuse just a pencil or eraser, he instantly pokes his friend’s eyes with a pencil without even a moment of hesitation, and never feels that what he has done is wrong and he had harmed a child for life.

It is generally observed that nowadays many children show very violent behaviour b beyond their age and have an explosive temper.  They cannot take, “ NO” for an answer. The bigger boys of the school don’t even hesitate to kill their own mother or grandmother if their wants are refused as. We had read in the news that grown-up boys had killed a girl if she refuses a very simple wish of him.

What is the immediate solution for this cancerous epidemic of violence among the minor children? Where will we go for help to save our children? Can this be arrested or stopped?

It is not possible to change our family pattern or change the system of highly educated parents fro working and contributing to the country be changed now. But, its time that the parent definitely takes some concrete measure in their behaviour to reduce the growing attitude of violence in our children.

To begin with, they should restrict their urge of going overboard with too many gifts for their children. Give them only that which is fit for the age and that which is creative like building blocks or puzzle. Minimum gadgets like a cell phone or I pad.

However difficult it may be, make time for your children. Remember all the hard work and money you are earning is only for their happiness and their future. And not paying lawyers or bailing them out.

Make a practice of sitting with your child without your mobile ( not for homework) to have a light conversation.  Ask about every detail of every period and the happenings in the class. Learn everything about his classmates. Does not matter even it is just the bedtime. But spend time with them for conversation. Not just mechanically reading a bedtime story.

If you have a garden nearby take your child there and engage some time with him if it is possible.  Fresh air and playing freely with other children will relax their mind.

Since we live in small apartments and children travel by bus and car it is necessary that your children get enough physical exercise.Recruit them in hard physical games like football, basketball, athletics, and swimming.  It is better that they are enrolled in proper classes for the same so that they will learn organized and disciplined play.

Instead of organizing lavishing birthday party, take your child to a nearby orphanage or physically challenged children’s school and make them donate their books and toys and clothes. This will create a sense of compassion and kindness in their heart.

Finally, keep a good atmosphere in the house. Don’t talk rudely to your help in the house but show compassion to them.  Remember at any given time your child is listening to you even when he is playing. All arguments in the house should be done behind the closed doors away from children.

The bringing up of our children, safeguarding them from violence and the umpteen poisonous habits of the society have become more challenging than ever before. But if you have a child it becomes your prime duty towards the society to groom him up to be a good citizen for future. Change yourself before it is too late.

(Since this topic is too vast in this part  I had written about the parents. Wait for my next blog where we would look into the prevention from Schools’ side)