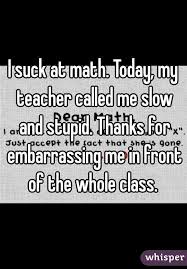 Teachers humiliating students  and students developing a hatred for the teacher or institution are common examples.

This incident occurred in a private co-educational school.The students of class five were studying Science.The teacher being new asked the students a few questions and decided to give the class a short test to see their capability.She took the papers and checked them instantly and asked the students to see their mistakes.A boy whose answer she had marked wrong, questioned her as he felt his answer was correct.The boy was a class topper and he was confident about his answer and the teacher didn't want to accept her folly in checking the paper.She shouted at him and told him he was over confident.She humiliated him on three consecutive days in front of the whole class.The boy got upset and tried to escape the Science class.He had started disliking the teacher and the institution for employing such a teacher.

This incident took place in an all girls school.The class 12 th girls were looking forward to their English class.The teacher came and suddenly started shouting and humiliating this girl.The girl had been called by a subject teacher and had been told to bring her bank details.Her parents were confused and had asked her to find out why the teacher wanted her bank details.The English teacher had come to know the girl had meekly has the teacher why she needed those details as they were vital details which her parents didn't want to disclose without reason. The teacher reprimanded her in front of the whole class, for such a trivial thing.This caused the girl to hate the teacher and her favorite subject.

This incident occurred in a small , primary school.The students of class two were having a good time during recess when one of their teachers entered the class.The teacher saw a boy busy eating with his mouth full and suddenly she humiliated the boy in front of the whole class.She called him a' monkey' who didn't know how to eat.She even went to the extent of telling him ,that his parents had not taught him any manners.The boy started hating her and his mind was full of hatred for her.He didn't wish her and even hated attending her class.