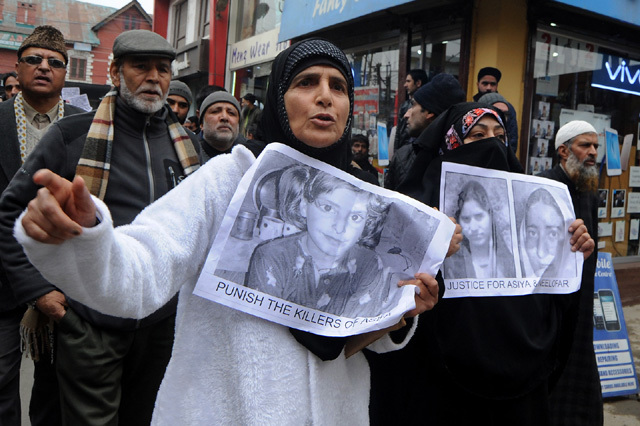 The two policemen arrested for allegedly destroying evidence in theKathua minor’s rape and murder case on Monday submitted a petition in the Jammu and Kashmir high court seeking a fresh CBI probe and invalidation of the J&K police crime branch investigation.

The petitioners, Sub-Inspector Anand Dutta and Special Police Officer (SPO) Deepak Khajuria, through their counsel Veenu Gupta, pleaded that the probe in the case had been transferred from one team to another thrice. First, the case was given to local police, then to crime branch and finally to a Special Investigation Team (SIT) of the crime branch.

The petition questioned the inclusion of a policeman, who was allegedly involved in a rape and murder case and later acquitted by a trial court, a few years ago, in the SIT. Calling the crime branch probe “incorrect”, the petition said there were series discrepancies between the postmortem and the forensic reports.

The body of the minor was recovered from a forest inHiranagar of Kathua district on January 17, a week after she went missing. The crime branch SIT has arrested eight people from the majority community for her rape and murder. Jammu bar association opposed the arrests, accusing the crime branch of communal bias against the natives of the region.

How did Asifa disappear?

When she went missing on 10 January, her family was living in a village around 72km (45 miles) east of Jammu city. On that afternoon, her mother recalls, Asifa went to the forest to bring home the horses. The horses returned but Asifa did not.

Ms Naseema informed her husband. He and some neighbours started looking for her. Armed with flash lights, lanterns and axes, they went deep into the forest and searched through the night. But they could not find her.

Two days later, on 12 January, the family filed a police complaint. But, according to Mr Pujwala, the police were not helpful. One of the police officers, he alleges, said Asifa must have "eloped" with a boy.

As news of the crime spread, Gujjar staged protests and blocked a highway, forcing police to assign two officers for the search. One of those who was assigned, Deepak Khajuria, was himself arrested in connection with the crime.

"She had been tortured. Her legs were broken," recalled Ms Naseema, who had rushed to the forest along with her husband to see the body. "Her nails had turned black and there were blue and red marks on her arm and fingers."

What do investigators believe happened?

On 23 January, six days after Asifa's body was found, the Jammu and Kashmir chief minister, Mehbooba Mufti, ordered a investigation by the crime branch, a special unit of the state police.

According to the investigators, Asifa was confined in a local temple for several days and given sedatives that kept her unconscious. The charge sheet alleges that she was "raped for days, tortured and then finally murdered". She was strangled to death and then hit on the head twice with a stone.

Mr Ram's son, Vishal, his nephew, a juvenile, and his friend, Parvesh Kumar, are also accused over the rape and murder.

Investigators allege that Mr Khajuria and the other police officers - some of whom lodged the complaint and accompanied the family in the search - washed Asifa's bloodied and mud-spattered clothes before sending them to a forensic lab.

They believe that the accused men wished to terrorise the Gujjar community into leaving Jammu. The shepherds use public and forest land in Jammu for grazing, which has recently brought them into conflict with some Hindu residents in the region.

"It was about land," said Talib Hussain, a tribal rights activist and lawyer. Mr Hussain, who led a protest in support of Asifa's family, alleges he was arrested and threatened by local police.

Ankur Sharma, one of the lawyers who protested on behalf of the accused, alleged that the Muslim nomads were trying to alter the demographics of Jammu, where Hindus are currently the majority. "They are encroaching our forests and water resources," he told the BBC. He said the accused had been falsely implicated while the real culprits were still free.

While the crime did not receive much attention in Jammu, newspapers in Srinagar, the capital city located in the Kashmir valley, carried the story on their front pages.

In Jammu and Kashmir state assembly, Mian Altaf, an influential Gujjar leader and an opposition legislator, waved the newspapers with photographs of Asifa while demanding an inquiry. Rajiv Jasrotia, a BJP lawmaker, said the incident was a "family matter" and blamed Mr Altaf for politicising the crime.

What happened at Asifa's funeral?

The Gujjars wanted to bury Asifa in a graveyard where they had purchased some land a few years ago and had already buried five people. But when they arrived there, Mr Pujwala said, they were surrounded by Hindu right-wing activists who threatened them with violence if they were to continue with the burial.

"We had to walk seven miles to bury her in another village," Mr Pujwala said. Two of his daughters were killed in an accident some years ago. On his wife's insistence, he adopted Asifa, the daughter of his brother-in-law.

His wife described Asifa as a "chirping bird" who ran like a "deer". When they travelled, she looked after the herd.

"That made her the darling of the community," Ms Bibi said. "She was the centre of our universe."