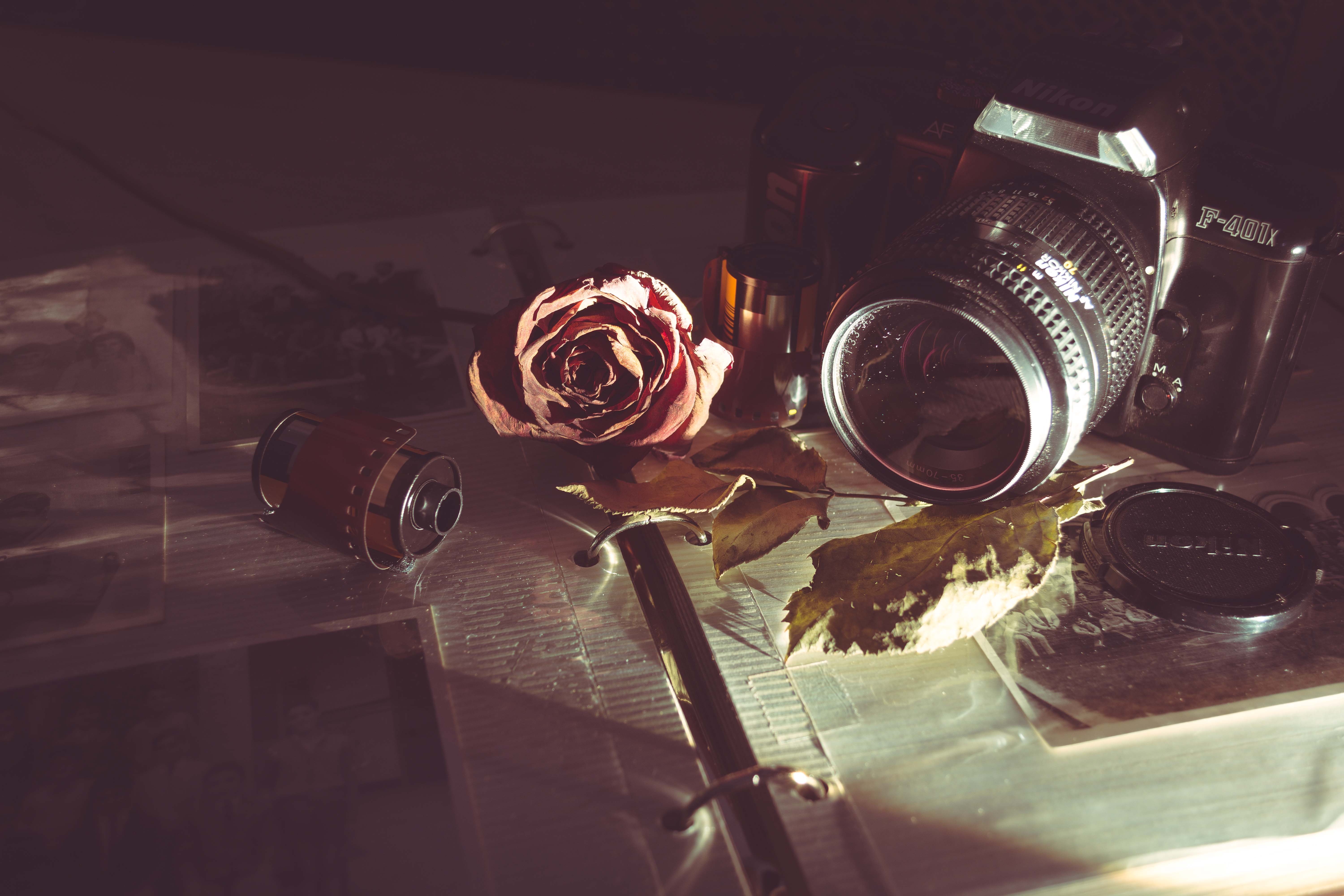 An age-old camera, a frayed rose - kept preciously between the lapels of a beloved book, that told their story. A photo reel which contained lots of lost memories, the happy, the sad, the overwhelming and the bland.

Covered in dust, surrounded by cobwebs, protected for an eternity. They told a story of a time left long ago, of memories cherished and forgotten. He dusted away the dust, removed the cobwebs and pulled out the treasure from the lost realms of time, trying to relive it all once again.

Sitting on the porch of that old rustic home, he reminisced- when sitting on that same swing they had made a vow to always be together. Holding the rose tightly, he tried to feel that warmth, the wet droplets of the rain, when he had proposed to her on that rainy night. He had waited for her parents to fall asleep, all the while hiding behind the pots of the plants on her porch, getting drenched and nervous as anything. And then she had sneaked out with a  cup of hot chocolate and a warm towel and it had felt like heaven, and she an angel.

He chuckled remembering all those forgotten times, that tremor of his hands, that nervous stumble of his voice when he had asked her to marry him. The rosiness of her cheeks as she had blushed, the teary sparkle of her eyes, and the felling down from the swing when she had thrown herself at him, hugging him tightly. It was the best day of his life.

He sat there remembering all those times, with a sweet smile on his face and the thought of his beloved who had just left him behind. A water droplet fell on the petals. His blurry eyes couldn't comprehend if it was his own tears or he had been transported back into the time; but still, he clutched the rose to his heart trying to absorb everything from it that he can. Looking towards the heaven he smiled as if seeing where he knew she would stand, waiting for him.

The car pulled up to the curb. With heavy steps, he entered the house where there had been so many memories he had framed and found. He touched the leaves of the climber that had framed the entrance gate, inviting with its sweet-smelling flowers that resembled home, roots. He brushed his hands through the bushes of roses she had loved, heard the gurgling water of the fountain as if no time had passed. But he knew she was gone, she was free but still will always be there with him till eternity.

Reaching the porch he looked at the old swing and saw him. He was still as if in a deep sleep, a sweet smile on his face. He took a step forward and then stopped, a tear slipped from his eyes and he staggered. Taking a harsh breath through the tightly closing throat, he looked at his hands. Clutched in them was a single red rose, faded and dry now with a droplet of water.

He knew the story, had heard it million times. He again braved a step forward and fell to his knees beside him. He was crying openly now but still, on his lips, there was a smile. The man in front of him may look fragile, but he had seen him in his prime and even now he looked divine. Over the time in his life, he had known his stubborn will. But seeing his body know, he was overwhelmed and still. He was overladen with grief, but he was proud and happy still. How could he not be, when he was the son of those who overcame even the god's will.