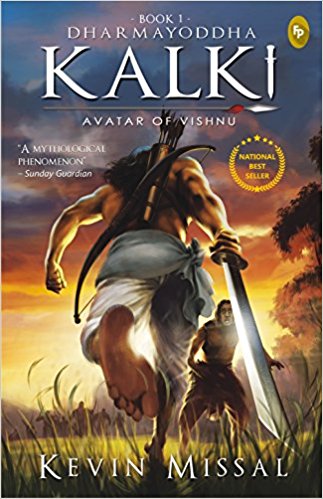 Blurb:
Born in the quiet village of Shambala, Kalki Hari, son of Vishnuyath and Sumati, has no idea about his heritage until he is pitted against tragedies and battles.Whisked into the province of Keekatpur, which is under the fist of Lord Kali, Kalki sees the ignominy of death trumping life all around him. He learns that he has been born to cleanse the world he lives in, for which he must journey to the North and learn the ways of Lord Vishnu’s Avatar; from an immortal who wields an axe. But trapped in the midst of betrayals, political intrigue and forces that seek to decimate him, will he be able to follow his destiny before the Kaliyug begins?

My Review:
Kalki – The tenth avatar of Shri Maha Vishnu, who is supposed to be take his form during Kaliyuga for samhara(killing) of Kali Purusha (Evil who sits in every person) as per mahapuranas. Inspired by these words author has taken readers into the world of mythological fantasy. Opening with a war after the deed between kali and Vedantta to acquire Keekatpur. Kali churns his evil with a motive of power. Somewhere in a remote village Shambala for the parents of Vishnuyath and Sumati, Kalki Hari takes his form(birth), who is not aware that his life has a purpose of “DUSHTA SHIKSHANA AND SHISHTA RAKSHANA” (Kill evil and Restore Dharma)
Kalki who lives a happy and prosperous life in his village meets Kripacharya who explains the purpose of his birth/reincarnation. As destined he eventually meets the evil king kali in the process of creating an empire.

Inspire of a slow beginning, the secret of the plot lies in the map which closely relates the characters and places without any impediments. Story is written in multiple viewpoint which makes you observant to every detail and keeps you on the edge and attentive to detail. Regardless the book is 400+ pages in length. The characters(tribes) are too many to remember, infact i referred the book back and forth to not to miss flow. Book is fast paced and always taking unpredictable twist and turns, sometimes it becomes as well.

Kalki sets off on a battle to finish Adharm. Will he succeed in saving the world?

The book is divided to two parts: Battle of Shambala & Rise of kali (My Favorite)

I see many similarities with the actual mythological characters
1. Sage Shuka (Parrot Head)
2. Lakshmi (Godess)
3. Arjan (Arjuna)
4. Thakshak
5. Vasuki and so on.

Special mention to the Book Cover – “The BEST BOOK COVER” till date, The characters are excellently written and well placed in the story. The pace of the book is very good. Super fine paper quality. Remarkable effort of the young author in through research, I’m sure he would have referred to various scriptures and epics before bringing this book out. If you are a lover of fantasy and mythology, this book is highly recommended.

This book carries almost all the aspects and breaking the myth of complex words when we take the mythological reference. Nothing in specific, I liked everything in this book. Hope unanswered questions are addressed in Satya Yoddha Kalki – The Eye of Brahma

PS: While I post this, I see the second book is taking its form. Cant wait more to read the next book in this series.