Book Review: For A Girl In A Star By Ratna Chandu 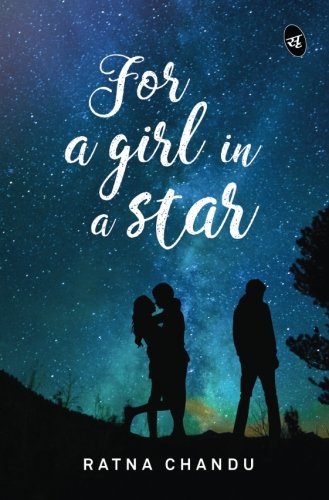 For A Girl In A Star is written by Ratna Chandu.

What do you do when your best friend – the one person who has stood by
you through thick and thin, knows you better than you know yourself, and
literally saved your life – falls in love with the same girl as you?
Avinash and Sahas, two village boys, arrive in Bangalore in search of art and
in pursuit of ambition. Sahas, hardworking and nervous, antonym to his
friend, has emerged from a troubled past only to find that his future doesn’t
come without encumbrances. Their friendship is the one constant in the
two boys’ lives, but that is tested when they each meet Aarti – a mysterious,
compassionate, beautiful girl who captures both their imaginations and
sets their hearts aflame.
Will their passion for the same girl, and an untimely tragedy, sunder the two
friends forever?
A compelling tale with twists and turns reminiscent of India’s melodramatic
films, For a Girl in a Star deals with the age–old staples of young love, heartbreak, and what it means to be a true friend.

Starting from the cover is eye catching. It’s not only the design work but also the substance of the Story as well. Just look at the design, there is a couple and a guy which is going away from the couple. The view is simply amazing. The title of the novel is thoughtful, and completely justifying the story. They complement each other well and also is according to the story, so it’s a perfect combination.

The story revolves on love triangle with the lives main protagonist Avinash (Avi), Sahas and Aarti. Avi & Sahas, both belonged to the same village Agumbe. Since their early childhood, they were the best buddies of each other and the depth of their friendship was beyond of any imagination. Since the time Avi saved Sahas’s life from drowning in his childhood, Sahas devoted his unconditional friendship to him and soon with time, their bond became inseparable. Aarti was a girl, full of life, with a caring and sensible heart, mature thoughts and kind nature. Her beauty of heart got reflected in her outer appearance also.

Aarti and Sahas are in the same college. With continuous interactions, and close encounters, even a shy personality like Sahas also had fallen head over hills for Aarti, but due to lack of courage, he could not get the chance to express his true feelings in front of Aarti. Aarti considered Sahas as a very good & genuine close friend, but she was unaware completely about the feelings of Sahas for her.

Sleep felt like a faraway dream since he meet her…

Destiny made Avi too crossed his path with Aarti suddenly in an awkward situation, and soon after the first sight, Avi noticed the actually inner beauty of that Aarti possessed and curiosity stuck him. Not one time, but frequently, and after a point, Avi got the chance to interact with Aarti directly. Though their initial interactions was one sided, but soon, after realizing the talent of Avi, and seeing the mesmerizing art of Avi, and his inner simplicity of heart, she started to admire him. With time, they got very close to each other and love blossomed inside the heart of both of them. Even their love for each other made them to take a step further.

It is the destiny which turns out to be so cruel that it brings so much misunderstanding in the life of two childhood friends who fall in love with the same girl. It happens in movies that two boys of different worlds find one girl and fall in love with. Talk about coincidence but it happens with these childhood friends. And of course, this love-triangle drives a wedge between them. The story revolves around their struggles and the way they cope up with grief and situations.The story makes you smile in the first half and leaves you sobbing in the second half, the story is narrated in such a manner that everything you read can be visualized.

Life sometimes throws you encounters only to leave you indelible memories

Language is simple and lucid to read and connect with the story and being engaged throughout the story.  Characters are also clearly justified to their respective roles and all of the characters mentioned in the book have been portrayed in such a way, that any reader will be able to connect with the characters effortlessly and live the journey with them. It’s a combination of emotions, revenge, friendship, realization, redemption, love, true love, pain, joy, happiness, laughter, family, fate & many other elements infused together. However, the editing errors including spelling and grammatical errors are numerous.  I had learned the true meaning of friendship from the book.

Recommended to all bibliophiles.

Ratna Chandu was born and brought up in Hyderabad and did her engineering in mechanical. Having worked as a Personality Development Trainer for four years, she gave up her job to be a full-time writer. She’s a voracious reader, an artist and a yoga freak. When she isn’t reading or writing, she tries her hand at varied culinary, the activity that helps her unwind and works as a therapy. Currently, she’s residing in Pune with her husband and son.