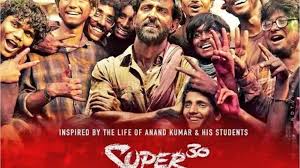 'Super 30' - Yes friends!! you are guessing it right, its related to numbers, its related with maths, its related with IIT, its related to dreams of millions, who wants to be leading examples for others and to out next generation, its related to art of learning and teaching, its related to anand kumar and of course its a story of Bihar. Bihar is famous of its education, art, music and talented brains who has added value to our nation. The state is widely known for ancient Nalanda university, Bodhi gaya, and talented ppl like - Chandra gupta Maurya, Chanakya, Aryabhatta, Ashoka, guru govind singh and ustad bismilla khan. Bihar has got immence treasure of brains, but the only thing that is missing in todays time is the mindset.  People do not want to use their talent in right direction. Talent has become bussiness either to exploit others or are making money
out of it. The rigid mindset towards caste, religion, stubborness to appreciate and respect others culture is missing. Education does not mean to score 98% or it does not mean you are IIT or NIT pass out, it means to be human first, should have humanity, should have respect towards others, should learn to respect the differences and diversities, should learn to add values to the life of others, should learn to inspire and motivate others instead of dragging them down, should understand that simplicity has nothing to do with money, caste, or education. A famous brillant and talented mathematician Anand kumar belong to state called bihar and he had to fight to bring the change in the society. He had to fight with that 98% of mindset, so that he could leave the lessons of wisdom for our generation to come. Anand kumar belonged to a very lower middle class family, where mere survival was for the challenge for the family and with the most brilliant son, who was qualified to study in Cambridge was even a bigger challenge. His dreams shattered into pieces when he was unable to pursue higher studies in cambridge due to financial crisis, but that did not stopped him. He luckily became a coaching teacher for one of the top institute in bihar. Lately he came to know that education has become business where in only financial fit students could take the benefits and the weaker financial students were struggling. The day he realised, he was going into wrong direction, he bought a revolution of change in the education, by teaching student of poor families for free. He took a small, but bold step towards his journey, went through lot of challenges, death threat, no money, no food, lot of wrong allegation, but still he survived and bought a big change. His hard work, dedication and nobel caused paid him the highest reward, where in his 30 students from the 1st batch got passed for IIT. Friends if you steal the knowledge, its not going to take u far, if you misuse the knowledge to make money, it would not last long, but if you use the knowledge to bring the change in the society by being idol, you would give rise to 100's of anand kumar from our society and for generations to come. Bihar you got brillant minds, but use your brains to construct others, do not use to destruct others. Learn to follow yourself to follow your dreams, peep into life, instead of peeping others so that you could  bring out the best in you. I give 4.7 stars for raising this issue. Education needs a change, so that students follow their passion, have zeal to learn and share, instead of just running behind the numbers and % ..👍. Ka samje ?? Ab raja ka beta, raja nahi banega, ab raja wahi banega, jo haqdaar hoga. Ka hai na talent ke liye, rich, poor, caste, state, college, marks, nmbr naahi matter karta. Talent to talent hai, kahi se bhi aa sakta hai. Was wonderful movie, now you decide your mission for another 'Super 30' 😊