Is There Any Difference Between Ashtanga And Hatha Yoga? 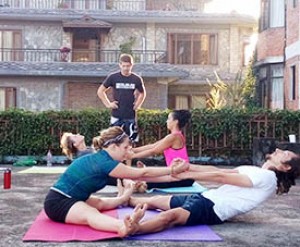 Summary: Many beginners are unaware of the fact that yoga has different forms, and Hatha and Ashtanga are the classical traditional ones. These forms have branched out many contemporary forms. Read the article and know whether these forms have any difference or not.

Yoga is a holistic art that has many layers, which a practitioner unfolds over the passage of time. The ancient science of life originated thousands of years ago and was designed to help the human race with health, emotions, spirituality, and longevity. Yoga practice comprises of ethics and disciplines that intent to improve overall wellness. Since its evolution, the practice of yoga has branched out into many disciplines, different yoga forms, and each have their own school to bestow the knowledge.

The contemporary forms have branched from the traditional forms of yoga - Hatha and Ashtanga. Both are the classical yoga styles and are different from each other, but together lay a strong foundation especially during  200 Hour yoga teacher training in nepal.

So, here are points that make you know about the difference, if any, between Ashtanga and Hatha Yoga.

The form is the oldest yoga style founded in the divine land of India and was further developed by greatest yogis and sages. The yoga form is designed to balance the entire being and intent to prepare the body for purification so that higher meditation can be performed. A popular yoga form, Hatha is the base of all yoga practice, and many forms have originated from it including Ashtanga.

A slowed paced form of yoga, Hatha practice is referred to the combination of Sun - Ha and Moon - Tha. The class of Hatha focuses on asana practice along with Pranayama that paves the way for achieving higher meditation. It is great for the beginners where they experience self-transformation as they align the body, mind, and soul.

Ashtanga yoga is a well-structured form of yoga practice which stems from Hatha, Ashtanga is also referred to as the Eight Limbed yoga as mentioned in Patanjali's Yoga Sutra. Ashtanga means eight limbs, and as the name suggest the practice takes the yogi to eight stages of transformation. The steps are starting from social and self-discipline, taking you through meditation, and enlighten you to the core.

A rigorous dynamic form of yoga, during the practice of six sequels you flow continuously from one asana to the other. Ashtanga is much more of physical yoga and focuses on:

Ashtanga calms the mind, strengthens the body, and intense practice is suitable for advanced yogis and for those who love challenges.

Both the forms are liable to bestow you the treasure of good health and life, and differentiating the two is in no way, proving one better than the other. Both are the excellent classical forms of yoga and provide intensified learning of the holistic art. It makes you learn which form suits you. Yoga in Nepal or at any other yogic land makes you garner profound knowledge of Hatha/Ashtanga yoga under the training of eminent teachers.

Hatha yoga intends on following a holistic path which includes asana practice, pranayama, purification practice and meditation. While practicing Hatha yoga you go into the pose, hold it for a while and release. In Ashtanga, the practice intends to put the practitioner on a higher state of self-realization, and during the practice, you just transit from one pose to the other without holding it much.

Ashtanga syncs body movement and breathing, while Hatha focuses on strengthening the body and prepares it for meditation. Hatha concentrate on perfecting the pose while connecting it with breathing, to increase flow to Nadi. Ashtanga follows the eight-limb steps to reach the path of salvation.

During 200 Hour yoga teacher training in Nepal, a person will study both the classical forms in a more intense and deeper manner for profound benefits and acquire an understanding of the ancient science of life.